I'll let you into a secret.  I was a teenager in the 90s.  Remember the grunge look? Checked shirts, terrible baggy cardigans and doc martens? That was me.  The alternative music of that decade – Smashing Pumpkins, Soundgarden, Nirvana – still fills my iPod now.  But one of the best things about growing up in the 90s was the number of women playing in bands.  While D'Arcy may have been seen as the token female in Smashing Pumpkins, you would have to have been feeling particularly reckless to suggest the same about Kim Gordon of Sonic Youth. The Breeders, Throwing Muses, Bikini Kill, Sleater Kinney, L7, even PJ Harvey; I saw women with instruments, and so the idea of learning to play and joining a band didn't seem at all outlandish.  But I also knew that prejudice was harboured in some quarters: that women couldn't play, couldn't song write or if you were standing around a sound check, you were a girlfriend and not a musician.  So I felt that what I was doing, playing in a band and writing songs, however small and insignificant, had a smidgen of wider importance.

So when I started climbing, I was already sensitised to the idea that some people might think men and women can or should do different things.  I don't think I've ever met, or will ever meet a climber who would say that women can't lead climb.  But even without any explicit injunctions about behaviour, when I look around the crag, it's noticeable that where women are climbing, it is most often with men. And more often than not, men are leading and women are seconding.  While every individual is different, and climbing isn't a competition (at least for most of us), I felt a bit disappointed. I'm lucky – there are some amazing female climbers, who are pushing boundaries at the top end of climbing.  I've also got a hugely inspiring peer group of climbers through Twitter, many of whom are female climbers, way, way better than I'm ever likely to be, but who you'll never see in the adverts in climbing magazines.  So that smidgen of wider (self-)importance which I'd felt while playing in a band reared its head, and I finally articulated what I wanted – I want to learn to trad lead.
So that's the aim for this year.  I'm staying in one place, building up a great group of climbing buddies, and focusing on increasing my competence both as a second, but also importantly trying to learn to lead.  I started leading indoors while the weather was still miserable and the nights long; I was surprised at the impact of clipping bolts on my ability to do moves that were well within my physical capabilities.  I told my new climbing buddy, Tom, that I wanted to learn to lead on an early season trip to Birchen Edge, and outlined my ideal scenario.  The stars were aligned; Tom enjoys helping newbie climbers and seemed to be willing to be bossed around by me, so he found the place (Harborough Rocks), supplied the gear and provided the support and encouragement I need.
So it was that I found myself tiptoeing up the short limestone crag at Harborough, attempting to jam a piece of protection into the rock.  For my first lead, Tom had picked a nice straightforward route; he led and I seconded, noting gear placements and making sure I was happy with the moves. We then derigged the belay at the top, walked back to the bottom, and I led.  My gear placements weren't amazing – the first piece extracted itself and slid down the rope once I'd placed another piece above – but I felt focused, concentrated, and yet remarkably relaxed.  Another route followed (onsight, this time, so no practising beforehand) and another and another.  Four routes later I was grinning like the proverbial Cheshire Cat, somewhat tired but also exhilarated and grateful. 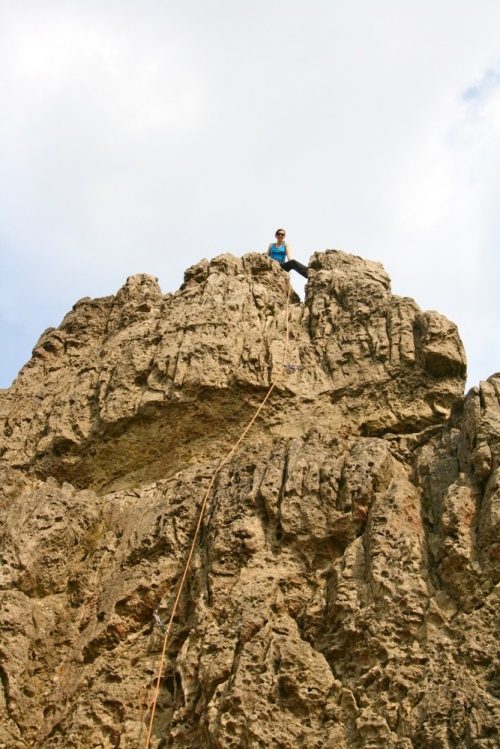 Woo! At the top of my first lead, feeling very pleased with myself 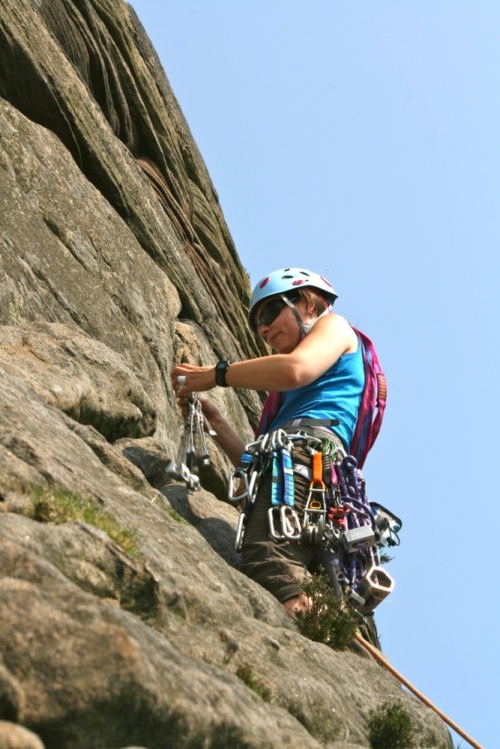 This is the bit I'm less good at – placing gear. Must stop thinking 'oh sod it, it'll be fine. So long as I don't fall off'.
Pictures by Tom Harrison and Laura Ulyatt.

3 thoughts on “On learning to lead climb”